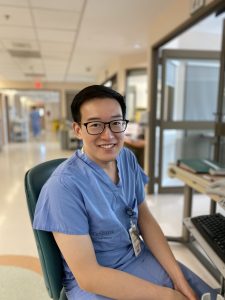 For many graduate students at Bloomberg Nursing, the Graduate Nurses Student Society (GNSS) provides a unique opportunity build a strong network and collaborate with peers in the nursing profession. But for Calvin Tsang, a 2nd year student in the Master of Nursing, Clinical stream, being a part of the GNSS has become a way to not only flex his leadership skills but to also create a sense of community.

“One of the draws for me of the Bloomberg Nursing Master’s program was the fact that you move through the program with your cohort,” says Tsang. “Being in a mostly online program, you need to work hard to develop that connection with one another, and being a part of the GNSS has provided a perfect way for me to foster that connection not only with my fellow classmates, but also the Faculty as a whole.”

Tsang is a passionate leader who is driven to make a difference and create an impact as a nurse. He originally wanted to be a social worker, knowing he would have a chance to help people in health care, but when he didn’t get into the program of his choice, he took a step back to re-evaluate what he was looking for in a career. He ended up finding that calling in nursing.

“Nurses can work almost anywhere in health care including leadership roles,” says Tsang, “that’s what drew me in initially, this possibility to make a difference.”

In the early stages of his career, Tsang started to participate in quality improvement projects on his unit, working with unit management to identify problems and come up with a solution that improved the overall patient experience. This first foray into leadership gave Tsang a new perspective on the potential he had to drive change beyond his unit.

“I sought out committees in my workplace that could create an impact at the corporate and policy level, like the nursing informatics committee, and Professional Practice for Nurses, to be able to provide input on how certain technological solutions or new standards of practice could be implemented into the nursing workflow,” says Tsang.

He has also thrived as a clinical nurse educator, providing educational support for nurses on his unit where he is able help others implement change or new directives in care. It is one of the many factors that spurred Tsang to consider a Master of Nursing degree and to ultimately put himself forward as student representative of the GNSS. As Tsang begins his term as President of the GNSS he is focused on using his experience in previous leadership roles to help his fellow graduate students transition to an increasingly in-person learning environment.

“There are a lot of things I am looking forward to in this role, but I think there is going to be a real need for many of us in the program to adjust to life beyond the acute phases of the pandemic,” says Tsang. “I’m eager to work closely with the leadership at Bloomberg Nursing to help graduate students feel re-engaged with the program again.”

Having worked in the ICU during the pandemic, Tsang has seen first-hand the impact of wave after wave of infections and the way that has altered the health care workforce. When asked about the future of nursing, Tsang is hopeful that changes at political and societal levels will foster a rebuilding of what it means to be a nurse.

“A lot of nurses feel like the system is working against us, and we’ve seen how we have gone from being celebrated at the start of the pandemic to almost being vilified,” says Tsang. “As a leader, an educator, and a colleague, I want to be able to say that nurses are valued, and do what I can to advocate for that change.”

As the start of the 2022-2023 academic term draws nearer, Tsang is excited to be working together with a team of GNSS representatives who are not only his classmates but his friends.

“I’m looking forward to seeing what we can accomplish together, I think this will be a really great year.”