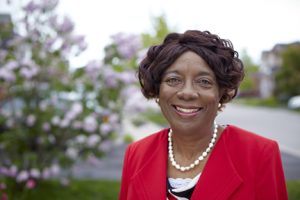 Angela Cooper Brathwaite, a graduate of the Lawrence S. Bloomberg Faculty of Nursing’s PhD program, has been named a member of the Order of Canada by Gov. Gen Mary Simon, in recognition of her innovative contributions and leadership that have spanned decades in the nursing field, including her integral work addressing anti-Black racism and her advocacy for women’s health, harm prevention, and quality care for patients.

Created in 1967, the Order of Canada recognizes individuals who have made a difference in their communities through their outstanding achievements and service to the country.

“It was a complete surprise to receive the phone call that I had been appointed to the Order of Canada, and it is a true honour. I feel really blessed to be recognized for my work,” says Cooper Brathwaite.

In recent years, Cooper Brathwaite has been a prominent voice among nurses as both president and immediate past president of the Registered Nurses Association of Ontario (RNAO). In this role she, along with her colleagues have worked with government representatives to draw attention to the ongoing challenges faced by nurses, as well as pressing issues that impact the health of society.

In 2020, Cooper Brathwaite co-chaired the first Anti-Black Racism Nursing Task Force, that looked specifically at anti-Black racism within the nursing profession. In addition to speaking to media and facilitating monthly webinars for Black nurses and students, the task force also conducted a survey to assess the level of systemic discrimination faced by Black nurses and nursing students and presented their findings in a report to advocate for meaningful change in the study and profession of nursing.

This type of advocacy and practice change has been a hallmark of Cooper Brathwaite’s nursing career particularly in relation to women’s health. In the late 1970’s while practicing as a nurse and midwife in northern Newfoundland and Labrador, Cooper Brathwaite set up one of the first women’s only clinics providing essential health care to women in several communities, including prenatal and postpartum check-ups.

As Director of Nursing at Lakeridge Health in the early 1990’s Cooper Brathwaite worked hard to advocate for the creation of a surgical unit for performing C-sections in the birthing suite, highlighting for hospital board members, the community, and local politicians the benefits of having C-sections done quickly on the same floor as the birthing unit while increasing the capability of labour and delivery nurses to scrub for obstetrical surgeries.

In addition to those changes, Cooper Brathwaite was instrumental in the creation of a long-lasting Ontario public health campaign, the Healthy Babies, Healthy Children program, which follows infants in the community right after birth.

“We had babies in the community that were dying of jaundice. That should not have been happening. In the Caribbean, where I’m from, we followed women and their babies for six months postpartum, and that wasn’t the case here,” says Cooper Brathwaite of her desire to make a practice change. “Here we had reduced the length of stay in hospital for maternity patients to 24 hours for a vaginal birth, and that early discharge was having a negative impact on babies of first-time mothers who could not always recognize the signs of jaundice.”

With Cooper Brathwaite’s leadership and through collaboration with public health units and maternity wards alongside the Minister of Health at the time, the Healthy Babies, Healthy Children program was implemented and remains a staple of postpartum care today.

Cooper Brathwaite is not only a successful and staunch public health advocate, she has also been and continues to be an avid researcher. Her doctoral work while at the Lawrence S. Bloomberg Faculty of Nursing centered on the evaluation of a cultural competency program for nurses teaching them how to be culturally competent and recognize the importance of this work when developing their nursing care plan.

“In 1998, the W.H.O designated Toronto the most culturally diverse city in the world, and from my own practice I knew we could have such a range of patients from various backgrounds. That is essential to consider when providing care,” says Cooper Brathwaite.

While these are just small snippets of achievements from a long and continuing career, Brathwaite shows no signs of slowing down.

“I never imagined I would continue to be doing this work, I thought I would be writing my memoirs by now,” jokes Brathwaite, “but I keep getting drawn in time and again, because there is so much to do.”

When asked what one thing she sees as essential to reshaping the nursing workforce for the future, Brathwaite believes that in addition to flexibility and resilience, the ability for future nurses to be tapped into their compassion is a key trait that nurses need to be successful.

“Put your patients before yourself because they need you. Nursing is more than knowledge and grades, it requires a true ability to have care and compassion for other people,” says Cooper Brathwaite. “I always remind new nurses that we need to listen to our patients. Remember it is the patient having the experience not you.”