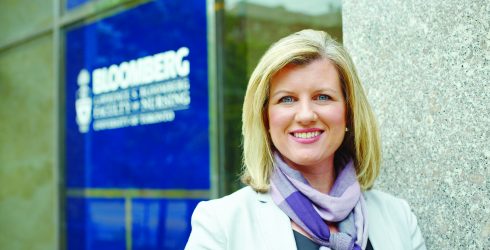 Dr. Kelly Metcalfe has been elected to the 2017 cohort of the Royal Society of Canada’s College of New Scholars, Artists and Scientists. Now in its fourth year, the College recognizes and brings together an emerging generation of Canadian intellectual leaders of scholarly, scientific and artistic leadership in Canada. In total, the College named 70 scholars to its academy this year.

An internationally renowned researcher in cancer genetics, Dr. Metcalfe is a Full Professor at the Lawrence S. Bloomberg Faculty of Nursing at the University of Toronto. She holds the Bloomberg Professorship in Cancer Genetics. Her research focuses specifically on the prevention and management of hereditary breast cancer. Her seminal publications in the British Medical Journal and JAMA Oncology identified the survival benefit associated with contralateral mastectomy and oophorectomy in women with breast cancer and a BRCA1 or BRCA2 mutations. Dr. Metcalfe is also an Adjunct Scientist with Women’s College Research Institute where she collaborates with the team of investigators in the Familial Breast Cancer Research Unit.

In 2014, the Royal Society of Canada society launched a special college to recognize and encourage leadership and interdisciplinary collaboration among Canada’s “new” generation of scholars, artists and scientists, with a focus on those who received their PhD within the last 15 years, have already received recognition for their scholarly excellence and have served as ambassadors of their fields.

The role of the members is to address issues of particular concern to new scholars, artists and scientists, for the advancement of understanding and the benefit of society, taking advantage of the interdisciplinary approaches fostered by the establishment of the college.