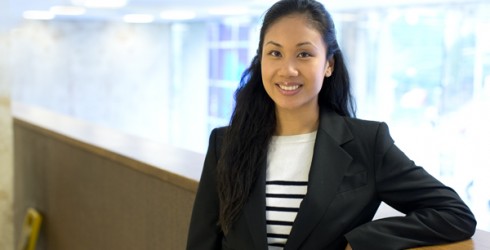 “Few academic institutions can offer the same innovative, new research opportunities, and a faculty made up of internationally leading researchers, that Bloomberg Nursing can provide.

“Bloomberg Nursing is affiliated with the top hospitals and I know I can get an outstanding clinical experience through this program.”

“Nursing was always on my mind,” says Monika Dalmacio, first-year undergraduate student at U of T Nursing. “It became my career goal when I was working at Holland Bloorview Kids Rehabilitation Hospital where I saw the connections nurses made with kids and how even little touches made such a difference in their day-to-day progress.” That year at Bloorview firmed Dalmacio’s decision to enter into nursing and after exploring different programs, was impressed with Bloomberg Nursing’s research reputation and began her undergraduate degree.

A Queen’s University graduate in biology and music, Dalmacio had a strong array of skills that fit well with Bloorview. Dalmacio took full advantage of an opportunity to volunteer with the resident music therapist but it was her initial experience as a swim instructor at the hospital where Dalmacio knew nursing fit with her goals and passions.

“Something like swimming, which so many of us naturally take for granted, could become a huge obstacle for a child or teen with different abilities,” says Dalmacio. “I learned quickly that working with them to build their independence in navigating the pool helped develop skills that went well beyond swimming.”

Dalmacio noticed how the children and teens in her classes found swimming to be a very motivating program. The different degrees of mobility that students grappled with on land disappeared when they entered the water. The students wanted to be in the pool and put a lot of effort into developing the necessary independence. That one-on-one work with the students and the experience of helping and watching them grow gave Dalmacio the idea that nursing was the career for her. It was also through her work at Bloorview that Dalmacio saw how it was the nurses who really held things together and played a large role in both the organizational side of things, by initiating and managing processes, but also having a strong knowledge of their patients and what would best meet their needs.

From there Dalmacio’s role expanded into a community music therapy program as a volunteer to help children strengthen their motor skills and work on self-expression.   Dalmacio was impressed at the positive impact of music therapy and learned of its benefits in reducing anxiety and stress in children with cerebral palsy receiving Botox injections. Dalmacio continued at Bloorview as a part-time research assistant working on a study that identified risk factors for pain in kids and youth with cerebral palsy and seeing, once again, the strong influence nurses had throughout the hospital, it was clear to her that nursing was the direction to take.

Now into her second month of the program, Dalmacio is looking at her career path, including a role as Vice President, Nursing Undergraduate Society at Bloomberg Nursing. Her experience with music therapy has Dalmacio interested in exploring alternative forms of health care and knows she will be able to navigate those interests through Bloomberg Nursing’s commitment to research and innovation.